Its getting Brighter all the time

Posted by PanzerKaput at 22:26 No comments:

Well I am starting with the painting for my friend, this time its someone from Bright's Regiment of Foot from the ECW. She is an re-enactor in the regiment and I thought it would be nice to do her this painting for Christmas. Brights Regiment was formed in 1643 around the shefield area. There is no hard evidence to what there uniform was but todays regiment wears grey, so I am painting him in grey. Also the kine eyed of you will notice that he has a firelock.

Posted by PanzerKaput at 16:57 No comments:

Yesterday when I arrived home from a hard days work sitting in front of a computer I had two parcels waiting for me. The one was from Orkdung, which contained a Paul Hick's sculpted figure of his old man. Its bloody nice too and the money I paid for it or going to help with the funeral costs. I'm going to be painting him up as Levy MP for Loughbough, Lord Lieutenant of Leicester, banker and owner of Humberstone Hall and thus commander of the Humberstone Militia. Here's a photo of the old gentleman. 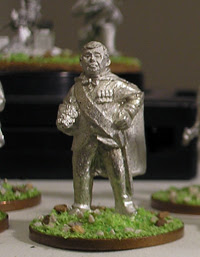 Now if that was not enough I also was very surprised to find my order, which I order on Tuesday late evening﻿, from Musketeer, the boys at Gripping Beast are so good.. Again Paul Hicks sculpts, as are most of my stuff for VBCW, I got the standard bearers, lovely figures, the Workers Militia Vickers, again very nice and both packs of the brigands. This pack has some lovely characters and I am planning on using them for farm hands. Here are some photos of them. 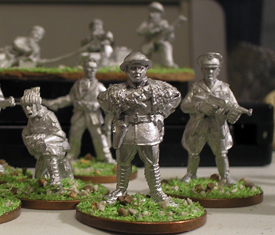 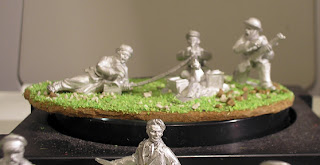 Posted by PanzerKaput at 00:21 No comments:

At least I have finished the shoe workers section of the Humberstone Militia. Its strange when you look into the past a little and you find all manner of things. The area of Humberstone is a strange mix of Posh landed banker gents and their workers, farms and a part built in the 30s for the workers of a local shoe factory. This has given me a very nice mix of units to play with. Shortly I shall have a proper write up for the Militia but until then here is a few photos of the shoe workers section. 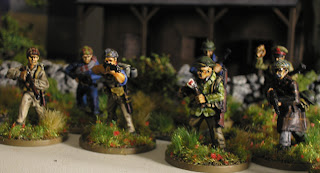 Posted by PanzerKaput at 21:57 No comments:

The Militia close to being finished

I have finished painting the workers section of the Humberstone Militia and here is a photo for you all to enjoy.

Just got to finished the bases and then add so weapong section and then I might have a good force. Some it will be time to do a hyistory and write for the Militia.
Posted by PanzerKaput at 22:58 1 comment:

I have finished the warrior, yippee and I rather like him. I hope that the person I have painted it for does too. Anyway here is the finished painting.

As the title suggests I have finished another one of the Humberstone Militia Workers Section. Now that makes four and I my half way though them. Just four to go, yippee. This time I have finished the petrol bomber and I given him a lovely summer checked jacket. Must get around to finishing the bases but I will wait until all of them are finished before then. Here is a couple of photos of them.

Its like painting by numbers in a way, the method that I use to paint, but the painting of the Saxon Warrior is nearly finished. Just got the gold to paint and tidy it up and then its done. Here is a picture of the stage it is at now. After this is finished then its another pianting for a friend for christmas but this time its a ECW soldier. Just got to get some information on them. 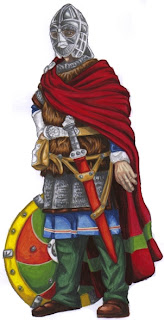 I have been thinking about my 1938VBCW force based on where I live. The area has changed alot from then and I have been very lucky in that my father in law as a book about the history of the area since the beginning of the century but maninly the 30s, 40s and 50s. Coupled with seeing some of the needlepoint pictures that my wife's mother has done on the local area and a picture produced by the WI of the village with all the old landmarks on it got me thinking why dont I base my VBCW force on my local area and the Humberstone Militia was born.

So far I have done a little research on the area and know that there used to be a Hall that was owned by a banking family and an MP. This has and in fact even in 1938 had gone, but I thought what the heck I am going to keep it. The family that owned the hall and the land around was the Pagets and the Levys. So using that as my basis I am visioning a small militia group and of three to four sections from the local area. There was some housing for a shoe factory, so a workers section is there, and a section from the village and farms and grounds workers. Of course there is the family and the loacl church of St Mary's with a section of uniformed troopers.

I am going to flesh out more on each section as I get them painted, at the moment I have finished the farm/ground workers and working on the shoe workers. Hopefully I should have them finished for 38fest in Jan 11.

Here's a couple of pictures of the ones I have finished. 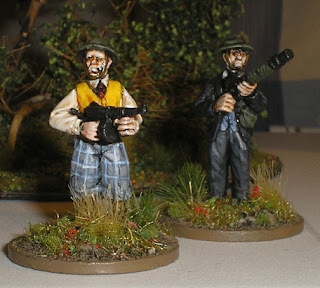 Posted by PanzerKaput at 23:18 No comments:

Here's my first real post and it is the latest painting that I am completing. This is for my wife's friend for Christmas, a bit of a surprise as she is a Anglo-Saxon reenactor, not a sword weilding one but one who is into the living history part. She enjoy's it and I thought it would be nice. This is an early saxon warrior, a high status one. As you can see its a work in progress and here are a few images showing the workings, as they say. I hope you enjoy it.

PanzerKaput Painting Desktop: The Start: "Hi there and welcome to my blog. I hope to show pictures, drawing and photos of things that I am current working on, as well as my rambles, ..."
Posted by PanzerKaput at 20:10 No comments: