The Finished League of St Andrews

Here is the finished League of St Andrews Militiaman is his full Scot/German glory. I have gone for the blond hair semi german look but with a scottish twist, which I hope that I have pulled off. He has his butchers apron and cleaver with tweed plus fours and argyle socks. He has a suitcase on his back to carried his equipment and personal stuff and is armed with a Mauser. I rather like this eccentric look and I think it is very Very British Civil Civil War. So here is the chappy in his full glory.

I have also noticed that this is my 500th post, which I have to say has shocked me as I never thought that I would get around to 500 of them and the blog would of died a long time ago. So thanks very much for reading and encouraging me to keep doing this. Cheers there for supporting this blog.
Posted by PanzerKaput at 22:56 20 comments:

Here are the two Socialist chappies enjoy a woodbine with each other. The chap offering the cigarettes is the Red Clydesider with his "Sunday Best" on of a nice heavy duty and warm tweed jacket and trousers, with a red neckscarf and armband to identify him as a left wing socialist member. He has a Breton cap of cord on as he works on the dockside and  has "home made"webbing. The other chao is a Falkirk Anarchist who has fashioned himself on the Spanish Anarchists during the Spanish Civil War. He wears a blue denim overalls with a service field cap of red and black, the Anarchist's colours, and is equipped with a soviet made Mosin-Nagant Model 1938 Carbine. Here is the picture. 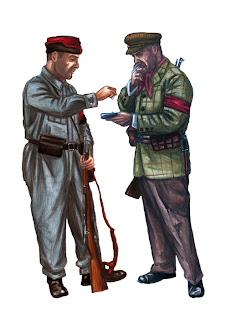 Here is the next illustration for the Armies and Enemies of the Scottish Republic by Solway and this one is of a member from the League of St Andrews. Now these are a small but growing garrison that guards the approaches to Edinburgh from St Andrews. Here the support for the Anglican league has manifested itself in the League of St Andrews and they are allied with the Republic at the moment but who knows what the future will bring. Drawn from largely the academic universities and  german population of Edinburgh this figure shows his German butchers past.

Yes indeed the other half of the last illustration is here. This one of a fella taking a fag which is being offered. This chap is a Falkirk Anarchist and is dressed in a boilersuit rather like the Spanish Civil War Anarchists worn with a british field cap which is going to red and black, the colours of the anarchist cause and a Soviet made carbine. I am rather pleased with the feeling in the pose and will look good once painted and next to the Red Clydesider. \here he is

OMG I Painted a Figure

Okay maybe not the best photo in the world but that is something that I am working on. The lovely lady, lovely in the loosest sense of the word, come to think of it lady too, lol, is a limited edition figure from Wargames Foundry's Street Violence Range. I am going to try of paint up some more of these wonderful figures as a little gang for my 7TV from Crooked Dice idea that I have for a game. So here is Sister Hot Wax for you . 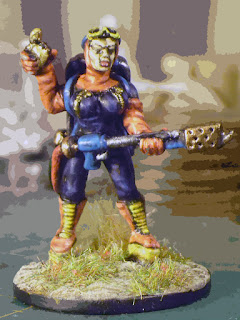 More Illustrations for the Scottish Book

Yes I am back on the trail after spending a fews off work and not really doing anything of note bar clearly out the office come art studio. I have to say that I feel much better now that I can see my sofa and carpet again, lol. Anyway enough of the domestic, firstly I would like to say that I won  a prize of "Postie Dice" from Ray at Dont Throw a One and I hopefully will be having the dice soon, so thanks very much there Ray for them and I can't wait to receive them.

Secondly as the title suggests I have start of the next illustrations for Si at Solway next book named Armies and Enemies of the Scottish republic. This chap is a socialist from the Clyde area and having strong docking and naval traditions there I went with a chap wearing his Sunday best tweed or checked jacket with a red scarf and in keeping with the naval theme and traditions there a Breton Cap. He has a Soviet made carbine and "home-made" locally manufactured webbing. I rather like the pose of him giving a fag to another chap, more on that later.

I have busy over the last couple of days design some decals, water based transfers, for Si at Solway. He asked me to do a sheet of various factions with a aim for them to be printed and sold. Now I have had a great time doing this and this is not to say that this is what the finished sheet will look like but I bloody hope it is as they take a day and a age to do. So I thought that I would show you wonderful chaps and chapesses the fruits of my hard work.

Also there is a great Dice give away, on Fran's Blog, The Angry Lurker and Ray's blog, Don't Throw a One, both Posties Rejects. Now the draw is tomorrow, Wednesday 17th October, so pop over and write a comment if you want some customer dice, and lets face it who doesn't.
Posted by PanzerKaput at 20:53 18 comments:

Yes here is the finished illustration cover for a new book that I cannot of course tell you about, but hopefully it will be out for christmas and I personally think it is something at a lot of Interwar Gamers have been looking for. I have really enjoyed doing this painting and in a way I have really put myself into the it. I love the picture as it sums up the british and the interwar/early war period with that "Dad's Army"  look. The "officer" in the suit has his Great War helmet and Webley service revolver with his Eton College silk cravat and handkerchief in his top pocket. The next chap armed with the standard double barrel shotgun which is very common in Britain before the war especially with gamers and farmers. He is wearing his Sunday "Best" and has his Tottenham Hotspurs footie scarf on. The last fellow is wearing plus fours with his Crossbats cricket jumper and is armed with M1928 Thompson Sub Machine Gun or Tommy Gun, which the British government were buying for the States as they had no SMGs. Here is the painting and I hope you chaps and chapesses like it.

Email ThisBlogThis!Share to TwitterShare to FacebookShare to Pinterest
Labels: Artwork

I am having great fun painting this book cover for a special secret project. I think it is a little more obvious for which "period" it is for but what is it for I cannot say but it has long been waited for but a good many people. I have gotten to a stage where I need some input of school, cricket club and footie club from your patron and now I am waiting for a reply. So here it is for you.

Email ThisBlogThis!Share to TwitterShare to FacebookShare to Pinterest
Labels: Artwork, Works in Progress

Book Cover for a New Book

Here is a new book cover, okay its at the sketch stage and it has been approved, for a new set f rules that hopefully we be coming out before Christmas. I am sorry that I cannot say much more about it, but some of you might be interested in. However here is sketch and l'll leave you to guess what the book is. 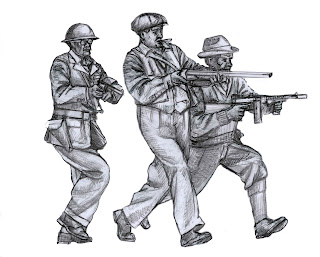 Here is the third illustration in the Scottish series for Si at Solway for the Armies and Enemies of the Scottish Republic. This fella is a private from the Scots Guards, a unit that sided with the Scottish Republic once declared, not surprisingly really. Here is wearing the later version of Service Dress that was smarter that the same version worn in the Great War, with collar and cap badges of the Scots Guards. He has the standard Pattern 1908 Webbing which is in marching order with the gas mask being carried on top of the field pack and is with a MK1, SMLE Rifle. The Cap is from there Dress Uniform with the checked band showing them to be a Scottish Regiments.