Merry Christmas and a Happy New Year to All 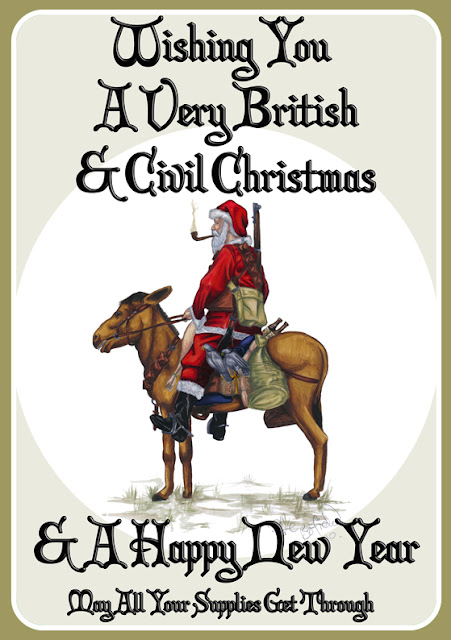 Email ThisBlogThis!Share to TwitterShare to FacebookShare to Pinterest
Labels: Xmas

Here is the next in the Humberstone Militia series and its the Garden Suburb Section. A wonderfully cute name for the section but it is based upon the area of housing built for workers of a local shoe factory. The Humberstone Garden Suburb is notable because it is the only time that a UK workers cooperative created a housing cooperative and built a housing estate for its members. The Anchor Tenants housing Association was formed in 1887 by the workers cooperative of the Anchor Boot and Shoe Co-operative Society which was a co-operatively run boot and shoe works in Asforby Street, Leicestershire. The members of the cooperative contributed a percentage of their wages and bought a block of land just outside Leicester by the village of Humberstone, and they built 97 houses. The first houses were in use by 1908 and the Anchor employees were let houses by the association at a rent that was collected to cover the upkeep of the properties.

The section is armed mainly with .303 SMLE rifles with the Shop Steward armed with a Begmann MP28 smg and the support for the section in the form of a Soviet made Degtyaryov DP28 lmg. The section carried a flag into battle as left leanings socialists politics and are considered the best motivated troops in the Militia, being used as the mainstay of any attacks.

Sorry for the blatant advert 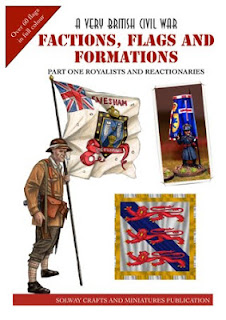 The first is a new flag book covering the Royalist and reactionary forces, with superb artwork from Pete Barfield (the flags are also available from Solway at 28mm on cotton or paper). 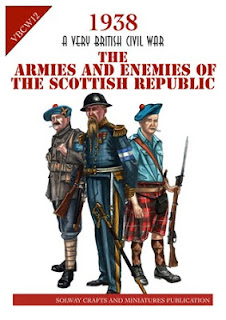 Both volumes are available now at £8 GBP each, plus postage.
Posted by PanzerKaput at 20:29 9 comments:

Here is the next of the Humberstone Militia series and it is the Farm Workers Section. This section is made up of the men who work the lands at Manor Farm and Nether Hall farm as well as general labourers from the village, mainly to do with working on Humberstone Hall's land.

The section is armed with a mix of rifles and equipment with the Sergeant armed with a Tommy Gun and the officer with a Broom Handled Mauser. The Section support is in the way of a Lewis Gun. Note that this section carries no flag as it is made up of the lower unskilled workers and according the the local Lord at Humberstone Hall "Don't need a flag as they will only throw it away", the class system in practice. They are the greenish of all the troops in the Militia mainly as no one will give them any time to train them.

The next in the Humberstone Militia series is the The Village Section. Now this section is made up from professions and shopkeepers from the village itself. The section has a number of ex service personnel in,is actually led by a Great War Veteran,  as well as untrained volunteers. This section is considered to be the backbone of the militia.

The section is armed along standard military thinking with most carrying a SMLE Rifle but the 2IC carries a shotgun for that extra help and the officer is armed with a pistol. The section support comes in the form of a Lewis LMG and the standard bearer has a C96 "Broom Handled" Mauser. The flag is that the Union Flag with devices emblazoned on for the city and the village.

This is next section of the Humberstone Militia for my VBCW force and its the St Mary's Section. This section is made up for the Clergy and Church Officers of St Mary's Parish.

These chaps are armed with a assortment of rifles, shotguns and pistol and have no support weapons save for the support of God himself and a MP28 Bergmann SMG. The flag carried for the Church flag.

I thought that I would get around to actually photographing my troops as a way of cataloguing them as I never really got around to photographing the individual units of the troops. I am planning on having a unit or two a week photographed and also this should help is remember what unit is what.

So first up is from my Humberstone Militia and it is the Nether Hall and Farm & Manor Farm Section.

These are the two manor farms in the area and its the owns for the Nether Hall and the Farm Managers who make up this section. Mainly armed with Shotguns except for his Lordship who has a Tommy gun and is Butler with the units fire power is the way of a Lewis Gun.

OMG I Have Been Painting

Yes indeed since finishing the book I have taken a little time off and been painting so figures, shock, horror, me actually painting so figures. The first figure I painted is from Crooked Dice and is one of there villains named The Guru from there 7Tv game, great game by the way. This is a wonderful little 28mm sculpt which is a little slighter than my normal figures but it as a lovely sculpt none the less. It come with three different heads for you to choose from and I went for the Ming the Merciless style head and actually painted him as well him. I think the model well suits that style of painting. 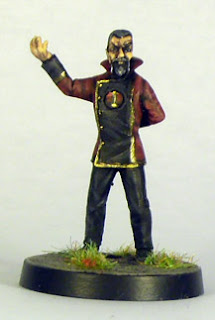 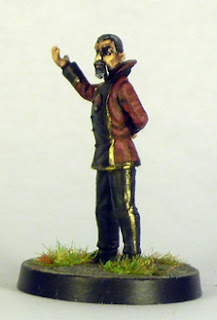 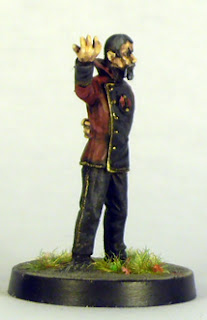 The second model I have not a clue where it is from, I had it laying around for years and I think its a old Grenadier model but I really don't know. I have gone for the Mad Scientist look with him with his white suit and the only real colour being the liquid in the test tube and beaker. I am rather chuffed with the way he has turned out, in fact both of them. 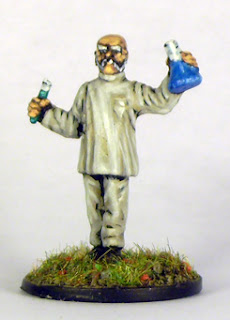 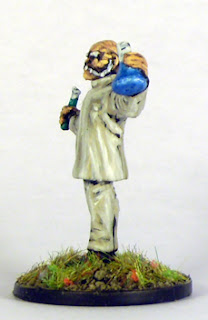 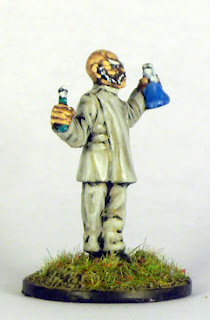 I recently have done so flags for a friend of mine for his Somerset Freedom Fighters and North Somerset Yeomanry and he has sent me through a couple of pictures of them. I have to say that the standard of his painting is second to none and my flags have only added, so might say, devalued, his great figures. So here are the photos and the flags.

Firstly are the Somerset Freedom Fighters standard bearer. The figure is from Musketeer Miniatures' VBCW Militia Standard Bearers and it is beautiful painted by the chap. I have to say that it looks damn good with the flag and all. 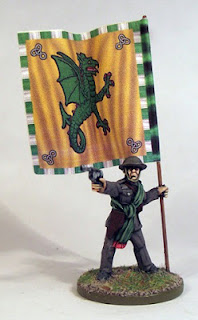 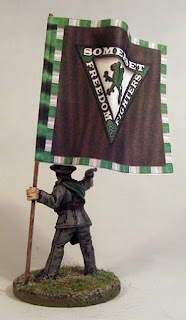 Secondly are the North Somerset Yeomanry and again they are wonderfully painted. Again these figures are from Musketeers Miniatures and again from Bill's VBCW range, this time they are actually billed as BUF Mounted Infantry, but can be used for other factions too. 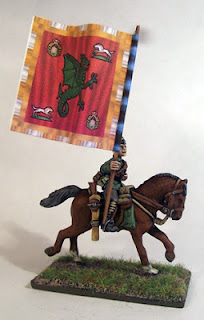 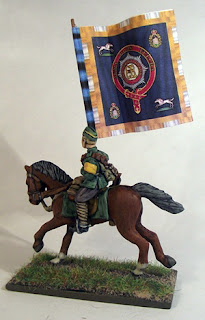 If interest the chap who painted them offers a painting service here
Posted by PanzerKaput at 16:49 12 comments:

The Scottish Book, a Flag Book and a Year Book

The books that I have illustrated and created flags for are on pre order at Solway now priced at £8.00 each plus postage and package. I know this is a shameless plug but I have to say I think that the Armies and Enemies of the Scottish republic contain some of my best work to date and I have really enjoyed illustrating it. Here is the cover for the book and the book itself contains details of the Scottish Republic, the Covenant, the League of St Andrews, the Red Clydesiders and  other Socialists forces, the Jacobites and more. 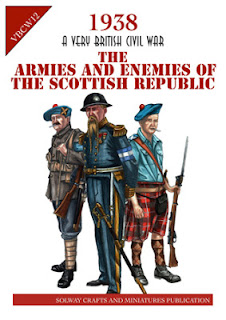 Also coming out and on pre order is The Factions, Flags and Formations Part 1, the Royalists and Reactionaries. Containing over 60 flags designed and created by me, this book includes details of the formations of King Edward VIII's forces of both the Army of the Severn and the Army of the North but also the British Union of Fascists flags and Legions. 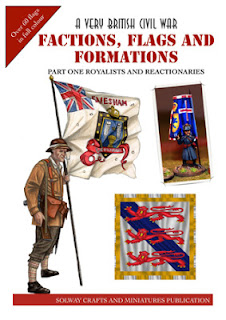 Si at Solway has also done a year book of the figures that he has painted which looks at a very interesting book. This includes a number of differing periods including VBCW and the vehicles that he has converted and painted. 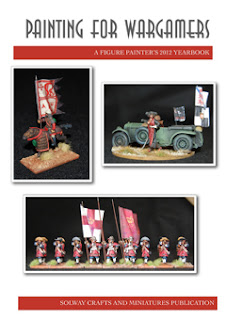 All these book now on pre order now and should be available from 20th December.

Also Only one day left to the raffle draw for the raffle to be drawn and have a chance of a figure sculpted by Paul Hicks, as header above. Cash prize is expected to be £2000! Still time to get involved:)
Posted by PanzerKaput at 22:52 10 comments:

The Last of the Scottish

Here is the last of the Scottish illustrations for the Armies and Enemies of the Scottish Republic for Solway  Here chap is a fella by the name of George Barr Ghillie  who is a leading light in the Scottish British Union of Fascists. He formed the League of Officers when the Republic was formed and he was been fighting there, with various degrees of success ever since. He is dressed rather unfavourable for the  Scottish weather, but is a bit of a health, fitness fanatic and love the feel of shorts. So here is the chap.

Here is the next in the leaders of Scotland series for the Armies and Enemies of Scotland for Si at Solway and it is Prinz Reprecht. Prinz Ruprecht is a member of the German aristocracy and was only to glad for the opportunity to leave the increasingly difficult situation in Heer Hitler's Reich for an adventure overseas. He brought with him a small force of Great war comrades and a few mercenaries, a small army forming in the highlands raising the clans and preparing for a confrontation for the Republic. Enter the Jacobites. Prinz Reprecht is wearing a German style Hussar uniform but of no known regiment. Instead he has chosen colours of Scotland and the Royals, blue and purple. He wears a Tam O Shanty with pheasant feathers in it and a red sash of a Royal Prince. Here he is.

Yes here is the first of the personalities of the Very British Civil War in Scotland and it is Admiral Douglas-Buccleah. He is a veteran of Jutland  and the naval war in the Great War and has come to the aid of the Scottish Republic, leading forces and organising defences. He is wearing the full dress naval uniform of the time with a wonderfully ornate sword. He has dropped the wearing of the Admiral's cocked hat in favour of the tin helmet. Si here he is.