Here are the Leicestershire and Rutland Post Office Rifles. Formed at the outbreak of the Civil War to protect the post they chaps have recently been uniformed at the Duke of Rutland's expense in new shiny uniforms. The uniforms are of the Duke's own design and have that toy soldier quality to the look, maybe the Duke was looking at his tin soldiers at the time, though he thinks its a Prussian look. The main blue uniform is the standard Post office uniform but the Shakos and wigs have that Prussian feel that the Duke was trying to create. The rest of the equipment again is some what borrowed from the Prussian uniform with the Duke trying to give a more military feel to the unit. I still have the Standard to complete. 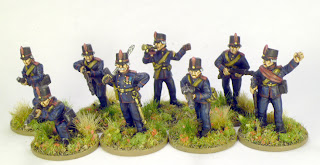