Tomorrow night I am going to be playing my first "real" game of VBCW at a local Shop called Gifts for Geeks, just love the name. I am going to be using the Bolt Action rules with an Army List that has been created by one of the Very British Civil Forum member, Pappa Midnight, which looks very good, link here to the Army Lists and used my newly created MS Excel Spreadsheet to help is the forces, link here, its about the third one down that works, and I am a more that a little excited about it as its the first time the Humberstone Militia has been out to play for a long time. We are playing only a small game of 500 points, still getting a feel for the game and I am hope for it to be a good one. 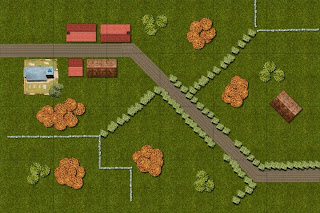 So here is the background of the game. Following the failed assault on the city of Leicester the Duke of Rutland's Royalists have fallen back, rapidly, to the defensive lines and Loyalist heartland around Melton Mowbray, Rutland and the Vale of Belvoir (pronounced Beaver). This meant the forces of the Socialist Council of Leicester took advantage of the chaotic situation and took back the lost village of Houghton on the Hill but stayed there as the support lines to the city could be threaten by Lord Quenby's forces from Quenby Hall. So the Council ordered forces to move out in the northerly direction to scout the area in and around Melton Mowbray looking for contact with the Dukes forces. Meanwhile the Duke's forces are patrolling the area around Melton Mowbray and at the village of Gaddesby the two forces bump into each other.
Posted by PanzerKaput at 20:59