Yes indeed another unit has been added to the Leicester People's Assault Column and this unit is a unique even within the ranks of the Leicester PAC as every member of the unit is Irish or their have Irish heritage, but more of this shortly. But firstly, why Irish? Well the answer for this quite simple, firstly Leicester has a large Irish community and secondly, I'm Irish too.

The Leicester Irish Workers, is the latest unit recruited of the Leicester PAC, being recruited from the Irish workers of Leicester, the steel workers from Corby as well volunteers from both the Irish Free State and Northern Ireland. The one thing is common with all the members of this unit, which is evident from the flag, is that they are all members of either the Independent Labour Party, if living in Britain or the Irish Republican Socialist Party, if from Ireland. Also there is rumours that members of this unit are also members of the IRA, but whether this is true or not is not known. 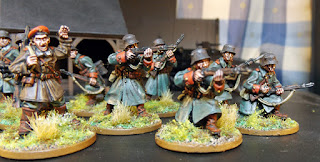 The commander of the Leicester Irish Workers, is James "Red Paddy" Walsh was an active and some say militant, trade union leader of the Transport and General Workers Union in Leicester before the start of the civil war. He is a very charismatic leader, a great orator and a driven, hard working man who came over to Britain during the mid 20s, shorter after the end of the Irish Civil War. Not a lot is known why Red Paddy came to Britain after the civil war and James Walsh has never stated why, but there is some evidence that maybe he was a member of the IRA during the Irish War of Independence and the civil war. 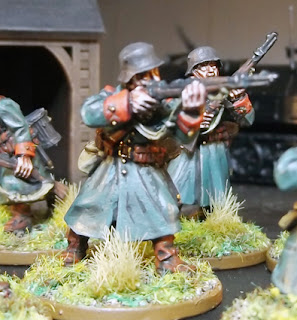 Walsh since coming to Leicester has worked for workers rights and getting a better deal and standard for all workers which has meant that his has drifted to the left and has also meant that once the Civil War brought in Britain he was very quick to help in the forming of workers militias based around the factories and the branch. Red Paddy was the leader who raised the workers to stop the boots consignment from being delivered to the British Union of Fascists at the start of the war and was instrumental in Leicester aligning with the Socialist League and actively fighting the King's Government and particularly the BUF. 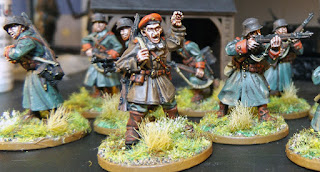 All this meant that Walsh came to attention of the PAC Commander Corbain, who after a private meeting agree to raise an unit for the Irish workers in the area, who are members of the ILP, LP and IRSP. This meant that these soldiers are hard fighters, especially in hand to hand, and have a espirit de corp based on their shared backgrounds and political belief. 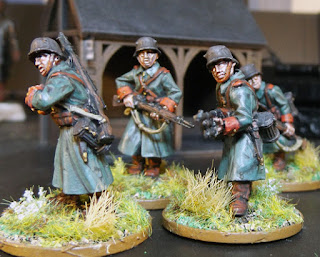 The figures that I have used are the Polish, 10th Motorised Brigade from Wargame Lord games, actually this is the unit that I won from Templars Crusade You Tube Channel as these chaps fit the Irish Free State uniform look that I was looking for. By the way I can recommend that you should check Templars Crusade channel, especially if you like Bolt Action or Warhammer 40K.

Have a nice day