New Illustration and the first of the new year

New Illustration is on its way and here is the first sketch of it. As I said this is the first sketch and there is a couple of things that need to be changed. It should be interesting to see how a picture evolves from starting sketch to finished piece. But can anyone guess the time period, I think it is going to be hard this one. 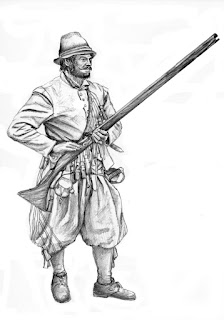 Have a nice day

The Snibston Colliery Militia and Colliery is finished

I am happy to say that after what seems a day and a age i have actually finished the Snibston Colliery Militia, Leicester Area Section, and I am jolly happy with them. I have mixed them with my Ironclad Miniatures Miners and the being led by Bert Cockshaw, Leicester Trade Union Leader and Activist. 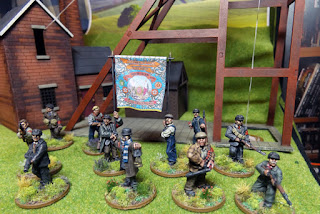 I have to say, as I have elsewhere, these figures by Sloppy Jalopy are wonderful, well sculpted and look and fit the part of a militia not just Miners, as I have used them for because of the separate heads.  Once Sloppy Jalopy put the separate heads on their website, I have seem them and they have planned quite a range of them, which will be good not just for Very British Civil War but also any modern, especially 1930s through to 1960s. 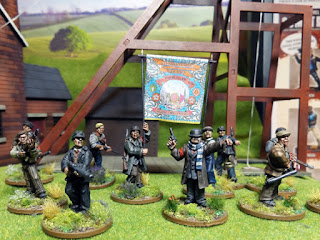 I am so pleased with the way the unit looks and works, using me time and fun to paint some of the most characterful miniatures I have painted for a while and showed me that using a limited, muted palette can look exciting especially with the additions on little touches of brighter colours. 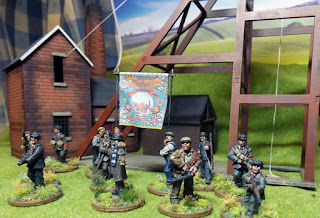 I am also very happy with the way the colliery banner worked so well. I also think when designing a Trade Union banner, especially a colliery banner, there is so much history and conventions involved than it is very easier to get it wrong and looking like a mis-match of socialist symbols. I spend so time research colliery banners which was no chore as I love Union Banners and was very surprised not to find a colliery banner for Snibston. I was toying with the idea of having Robert Stevenson face on the banner as he was the engineer that built the Snibston Colliery and railway too but instead I went for a more traditional looking banner instead.

There are various symbols on the banner itself that actually have more to do with Very British Civil War than proper socialist devices but in general I think it works rather well.The VBCW symbols I was talking about is the Clenched Fist and Star symbol on a green background, the symbol of the People's Assault Column, the Independent Labour Party symbol as the Bert Cockshaw, who is a miner and trade unionist was a member of the ILP and the CPGB, is the commander of the Leicester Miners and the two cinquefolium are the symbols of Leicester. 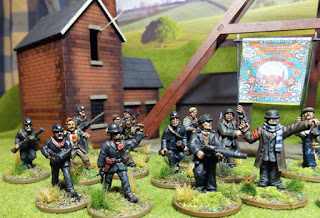 Here I am showing the Sloppy Jalopy Miners with the Miners from Ironclad Miniatures and how they mix together. I have to say that they do mix rather well but the sculpting and poses on the Sloppy Jalopy Miners is so much better to be in a different league. Thats not to say that the Ironclad Miniatures Miners are bad, far from it as they are very nice miniatures and look lovely once painted but they suffer from a lack of poses throughout the range, where as Sloppy Jalopy's Miners all have different poses and with the separate head you have greater versatility. 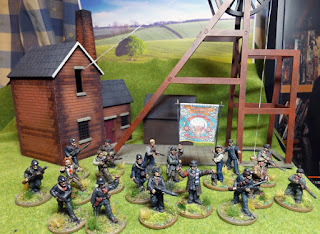 So here is the full section of miners, actually its not all my miners as I have a few more by couldn't get them in and they do look the part. What I haven't mentioned as I should is the Pithead and Pump Station. These MDF buildings are from a company called REDvectors who are a small UK company that do lots of MDF buildings for different periods. Actually the Pithead was designed for 20mm but I requested him to enlarge the doors and windows which they did and it works a treat. The Winding Gear looks the put and I painted in that hull red, rusty colour as that was the colour Snibston Colliery Winding Gear was painted, to protect the metal I wish. The Engine House or Pump House is the right size in 28mm actually as they are generally small buildings built around the engine and winding gears. 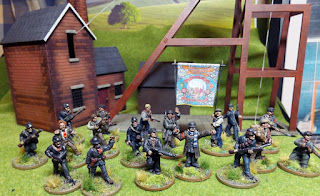 All in all I am very happy with the way the miners and the pithead have turned out and they should be look on tour and on show at Patizan in May and may even make an appearance at Hammerhead in March.

Have a nice day.