Here is my first ever Blood Bowl team that I ever painted back when Ogres could still be fielded in Chaos teams. These were painted so a friend of mine would have a painted team for a competition we were entering and they were actually came second in the best painted category, mainly getting he votes for the colour scheme and the fact that they are all converted for Chaos Warriors and Chaos Beastmen plastics which at the time no-one else had done. I think the name was Niloc's Knoblers or something like that. 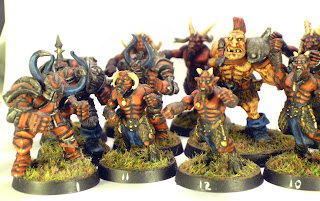 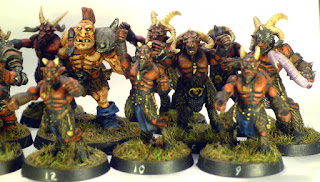 I love Blood Bowl, it was one of those games that you played and fell in love, that was it for me and I have played for the 1st edition right though to now and even play it on the PC too.