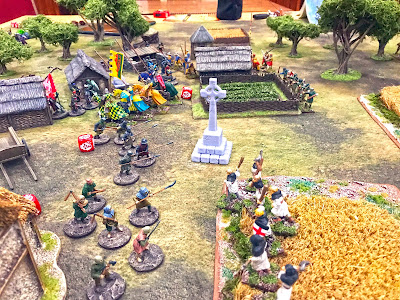 The sun rose over the village of Humerstane in Leicester where the local Knight, Sir Guillaume le Lion raced with his retinue on that morning to defend the village from the raiding intentions of Baron Lee of Upton. The village was strangely empty as the villagers who were not with Guillaume, had left to hide in the woods surrounding Humerstane with their livestock and goods, as the two retinues reached the edges of the villages. 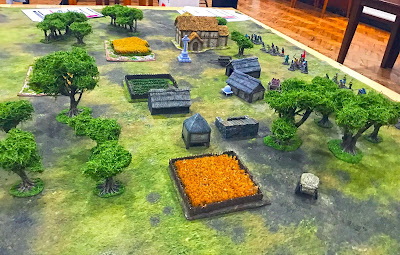 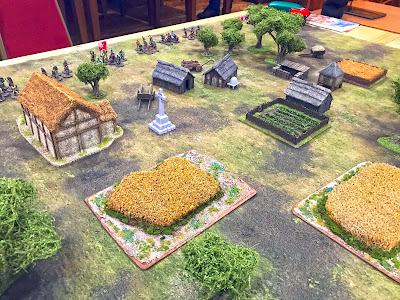 The forces of Baron Lee of Upton arranged his forces in the ploughed fields to the north of the village while Guillaume le Lion has setup in the village to the south. Baron Lee’s horse took the central position in his retinue with the sun glinting off both the lances and the mail of their coats. His Mounted Sergeants he placed on his right with his bowmen in the centre to support his Foot Sergeants and the Milites Christi of Upton Abbey arranged on the left to cross the wheat fields and liberate Humerstane’s church of St Mary’s. 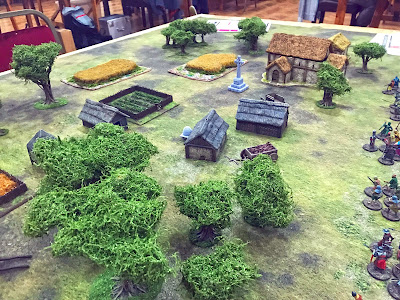 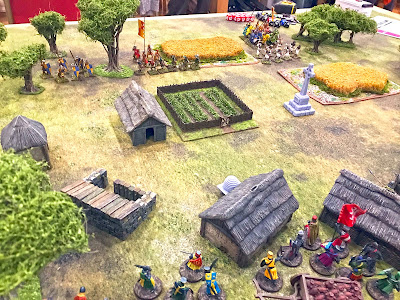 Guillaume had set up with his forces in a defence position in and around the village. Guillaume on foot set in the centre of the village with his banner raised, surrounded by his personal retinue of favoured knights and his priest. By the church of St Mary to the right of Guillaume are the local levy, the fighting men of the village with the local spearmen to support both the levy and the lord. To the left of Guillaume where more knights on foot with their two-handed weapons, the lord’s sergeants and crossbowmen took the far wing position to provide missile protection. However, being in the village and the woods on the left of the village, made it not the best place to fight. 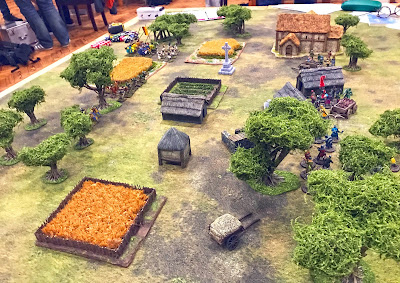 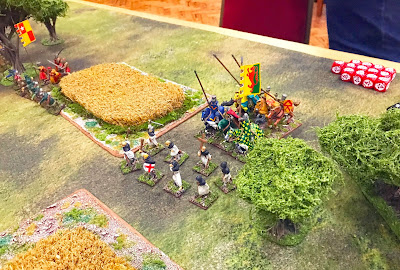 Baron Lee of Upton took the initiative and sent his Milites Christi of Upton Abbey into the field to take the church where his bowmen loosed their arrows into the spearmen. In the meantime the Foot Sergeant, with Baron Lee’s sub commander, Rufus De Ville, behind them, advanced into where the crossbowmen of Guillaume le Lion loosed bolt into them and the foot knights advanced to battle them. The Levy marched to check the movement of the Milites Christi by advancing to meet them at the edge of the wheatfield as the Milites Christi emerge from them. 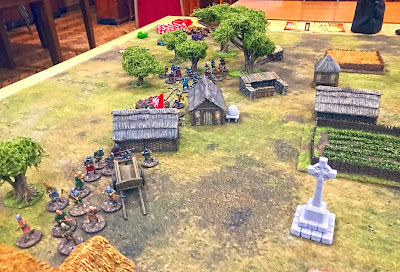 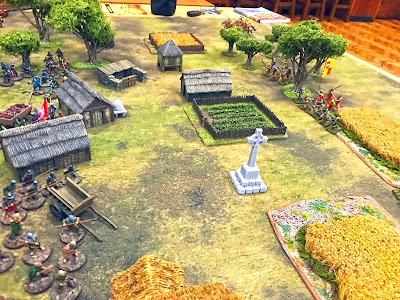 Arrows flew around the Spearmen but somehow only one of them fell to them and the Baron Lee’s Sergeant somehow stood up to the hail of bolts from the crossbowmen with their shields protecting them. These Sergeant, after withstanding the hail of bolts, charged into Guillaume knights with their two-handed weapons but they largely encountered each other out. But the Knight launched a counter attack bringing their large weapon to bare but again the shields of the sergeants saved them again. 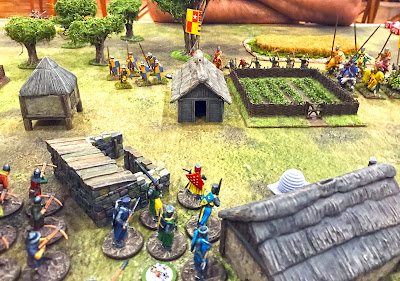 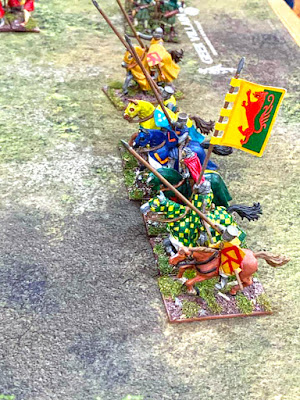 Meanwhile, the truth slowly revealed itself as to why both force’s clashes knowing each other’s dispositions and where they would be as the traitors on both sides slowly relieved themselves. Upon seeing that the knight Rufus De Ville was with Baron Upton’s forces, breaking his terms of release, Guillaume ordered that he should be killed for a being a traitor for selling the secrets to the Baron. Also, Baron Lee of Upton spied a knight, Jacque de Greaslis, within the ranks of Guillaume le Lion’s retinue leading Guillaume’s foot sergeants and he declared a price on the head of the turncoat within their ranks. Traitors within the ranks of both sides clashing with new vigour. 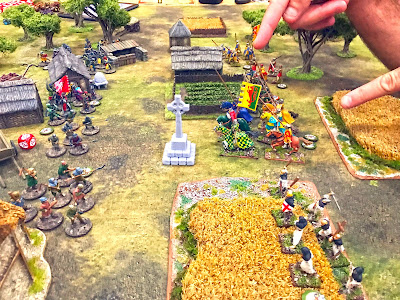 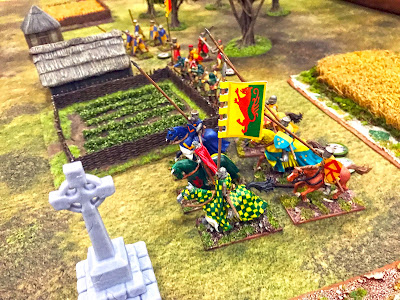 The Milites Christi of Upton Abbey rushed out of the wheatfields straight into the ranks of Guillaume’s Levy and caused many injuries and deaths on the Levy who backed off from force of the change, and at the same time Baron Lee of Upton clashed in to Guillaume and his retinue with their lances. Guillaume and his knight stood their ground against the shock of the change and formed a defensive formation but did suffer a death of a knight from Sir Ambu of Lance, his vert and or colours on his caparison flowing as the horse charged. Guillaume and his men attacked back and nearly felled a rider but pulled but from the engagement. But Baron Lee pressed home the attack further and slowly whittled down Guillaume’s Retinue and the weight of horse took its toll. 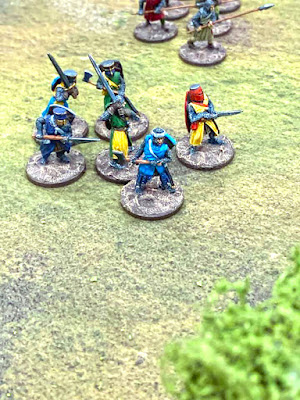 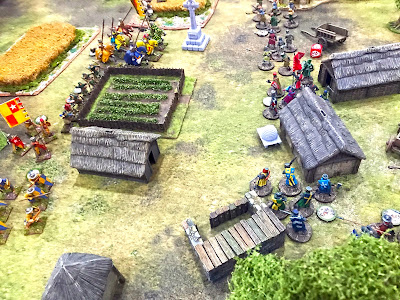 Baron Lee’s foot sergeants and Guillaume’s foot knights continued to clash and fight themselves to a standstill with very little to show for it, with neither side getting the upper hand. Milites Christi carried on with their attack against the levys of Guillaume and the levy slowly started to give ground and fall back on weight of God’s word and the Milites Christi's clubs. 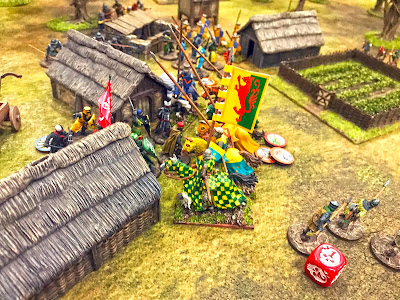 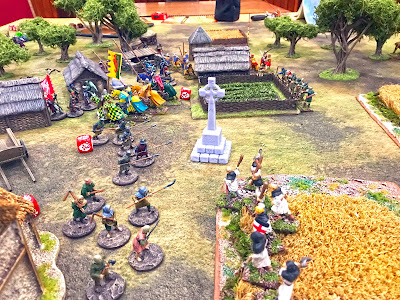 However, in the centre of the battlefield, Baron Lee of Upton continued his attack with Sir Ambu of Lance and his retinue against Sir Guillaume le Lion and his men. Guillaume’s men fought bravely but the weight of numbers slowly reduced Guillaume’s retinue until he was left on his own standing. At this point, and with the swords of Baron Lee’s men bearing down on his, Guillaume yielded and was captured. The rest of Guillaume’s force ran away and left the village of Humerstane to Baron Lee and his men. This meant that Sir Guillaume le Lion’s store of his fine Portuaire Cornish Beer from Helles was captured. 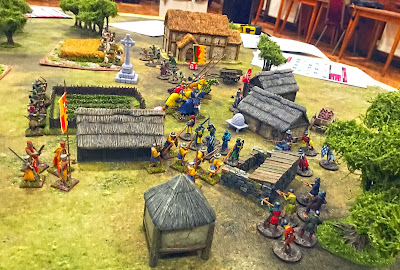 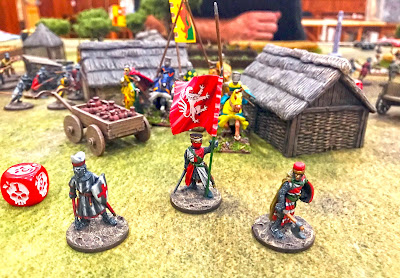 The two traitors lived and the feud between them and their lords continue but under the conditions of Sir Guillaume le Lion’s release, beside the ransom being paid, was that the death sentences issued to the traitors be rescinded, but we will see how long that will last for. 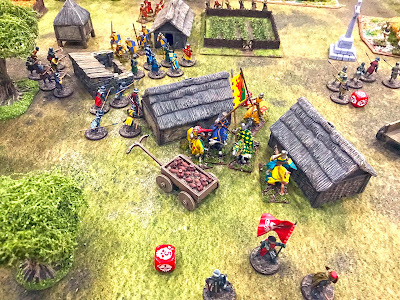 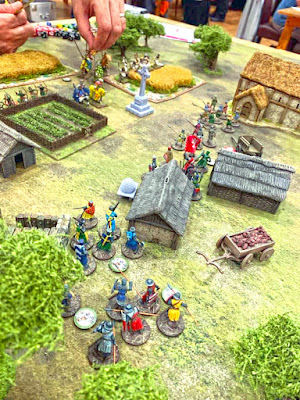 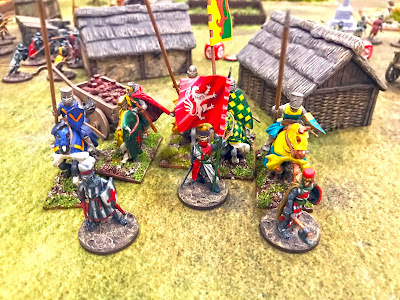 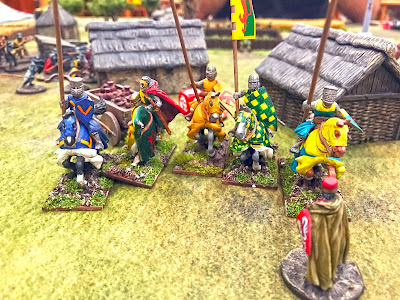